Social Media Tips From a Few of Your FRIENDS 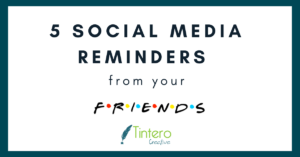 Friends fan here! I’ll be the first to quote a Friends episode when out to dinner or at a party. And, gosh, there are just so many good nuggets to quote! While social media wasn’t a thing when Friends aired on television, and they weren’t building the episodes around digital marketing principles, a few favorite moments from the show do actually support some helpful social media tips and reminders for those using social media to grow their brand. Here are just a few of my favs…

There’s got to be a better way! Most Friends fans will remember Joey’s gig in the milk spout commercial where he messes with a milk carton only to spill all the milk. He exclaims that there’s got to be a better way to pour milk. That’s where the little gadget they’re selling comes in handy! When it comes to social media marketing, there is a better way to post and that is using a scheduling tool. I’ve used a number of third party tools over the years and they’ve saved me time and headaches to post to multiple profiles or schedule out content. Many of these also have helped me monitor comments and messages in an efficient way. Our current winner when it comes to third party tools is AgoraPulse. This tool is so versatile and the team is always coming out with new features and capabilities.

Reminder #2:  Be Willing to Pivot

Pivot! Okay, so in the year 2020, this Friends reference has been used a number of times, but it’s so relatable, and the year of 2020 has just reminded us of it. All social media marketing needs to be ready to pivot at any moment’s notice. We can plan and schedule our content, but we need to be nimble enough to pivot. No one understands that better than social media managers. Regardless of pandemics or cultural crises, social media has always been a space that has to be ready to turn on a dime. Trends change fast, user behavior changes fast, and news changes things too. It’s simply the nature of social media to be a place where life happens fast, and brands need to come into any social media strategy with the mentality that they should be ready to pivot at any moment.

One of the struggles I had working for the traditional agency model was that it had so much red tape. As social media became a major player in marketing strategy around 2010, I saw that our clients were being left behind because there were too many steps in the traditional agency setup. That’s part of why Tintero Creative was started in the first place. I wanted to be able to provide more nimble strategy and service to my clients who entrusted us with their social media content.

Oh Smelly Cat! Friends fans know all the words to this ridiculous song and we love it. There’s something about Phoebe’s out of tune melodies that is charming. But, you know what? We all love the same things about social media. It’s a space where we can come with some imperfections and still be loved. Live video and Stories taught us that. It’s hard to always have perfect lighting, studio quality sound, and the script perfectly memorized. When you do live video or share candid moments on social media, sometimes your brand can perform even better than those perfectly manicured posts you spend hours on. People crave authenticity online and social media has continued to show us ways we can share that true self with the world – if we’re willing to.

Reminder #4: Be Willing to be Weird

Phoebe’s running style is something many Friends fans have emulated in real life. Come on, you know you have! It’s weird, it’s cooky, and at first glance looks embarrassing. Rachel had to get over caring what others thought of her and found out it was actually fun. So much of social media involves putting yourself out there and being willing to share your thoughts, ideas, and expertise at the expense of being criticized or looking possibly silly. I think most people probably are a little timid at first to share some things that make them look weird. But, weird and “out-there” often get some attention. Just think about the ALS Bucket Challenge. Everyone who did it looked weird and ridiculous, but people enjoyed watching a bucket of ice water pouring on their friends. It’s weird, makes no logical sense, and yet, became a phenomenon on social media. Be willing to go for weird!

When Ross gets a spray tan is one of the reasons I will probably never get a spray tan. I’m sure it’s much easier than that, but I don’t know that I want to take that risk of overthinking the process. Ross overthought things and ended up getting sprayed on one half of his body waaaaay too many times and then none on the other side. In social media marketing, many people overthink the process. They count too long and try to calculate the plan so much that they never actually get going with anything. They’re so worried about what they will do, but then they don’t ever get posting. One of the biggest mistakes in social media is inaction. Any thoughtful action you take on social media, even if it’s not 100 percent perfect, will help your brand move forward. You can always improve as you go, but you need to make that first post, and then another and then another.

Click HERE to submit a request for our team.